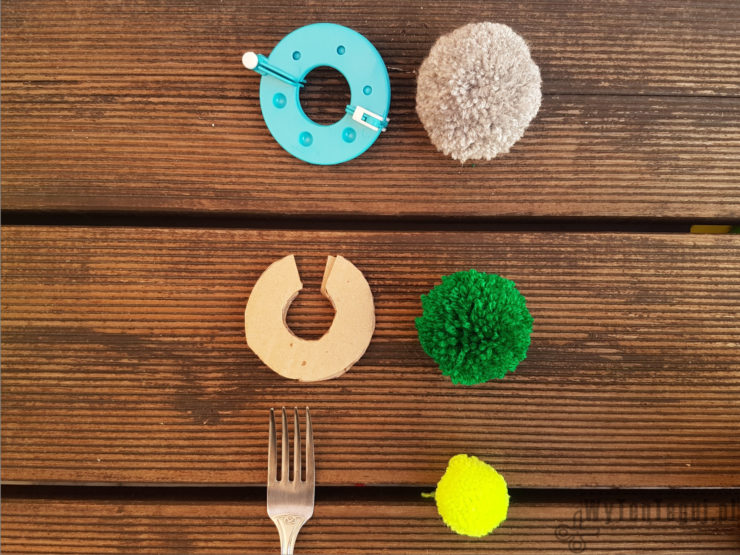 Recently, I got into the topic of making yarn pom poms. I have gone through countless pages with instructions on how to make a pom pom. I chose three ways and described below. Additional I created a list of the pros and cons of each approach.

I invite you to my subjective comparison of 3 methods of making yarn pom poms. And most importantly, below you can find the step by step instructions for each method. You can choose the one that suits you the best

For comparison, I chose three methods: a fork, a pom pom maker and a cardboard circle. I looked at: the price, the available pompom sizes that can be created using given method, the difficulty of making, who can make the pom pom and my subjective feelings after facing each method. See the graphics below for details.

My unquestionable favorite is the pom pom maker. In the further part of the post you will find the instruction for each method.

I do not hide that this is my favorite method. I fell in love with these pom poms 🙂

This method is very similar to making a pom pom with pom pom maker. In my opinion, it differs primarily when the yarn is cut. Here, this step is much more difficult because the fibers run away and you have to be very vigilant and careful. However, the huge advantage is that you do not need to buy special equipment and you can create a pom pom of any size. You just need to cut out smaller or bigger cardboard circles.

Pom pom on a fork

Very easy way to make a pom pom. It is ideal for playing with kids and drawing them into the world of DIY. An example of a chicken made on the basis of such a fork pom pom is here.

Which method do you choose?