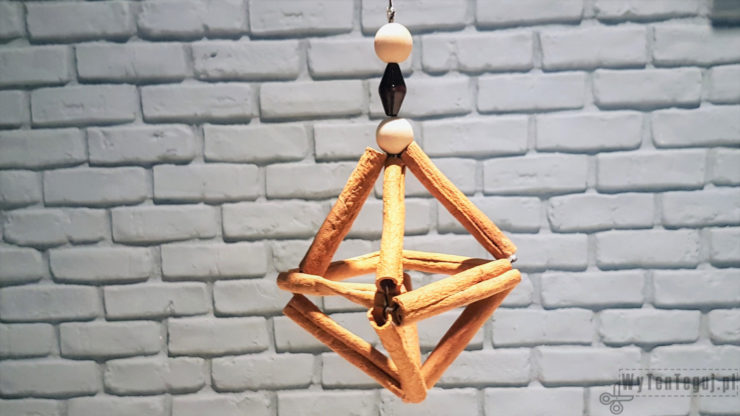 Making of the cinnamon sticks ornamanet

You can make such an ornament in many shapes. I decided to go for the octahedron.

Start by preparing the middle part, i.e. the square. For threading, I used a skewer stick that imitated the needle. Make a knot at the end of the twine and put it on the tip of the stick. Then simply thread 4 cinnamon sticks on the twine and finish with a knot.

Then prepare 2 bits of twine, quite long because they will run from the bottom to the very top and finally they will form a pendant. Tie the twine in half, this will be the bottom point of the ornament.

After binding, there are 4 strings. Thread a cinnamon stick on each of them.

Then, at the ends of the sticks, tie the corners of the cinnamon square from the first step. Do not leave slack and tie decent knots, it will make your work easier later.

Now you have the lower and middle part. It remains to apply another 4 cinnamon sticks to 4 strings tied to the corners.

Finally, thread the wooden beads and form a pendant.

The cinnamon stick decoration is ready.

If you are looking for more ideas for Christmas decorations, you’ll find them in the Christmas section.

One thought on “Cinnamon sticks ornament in Scandinavian style”