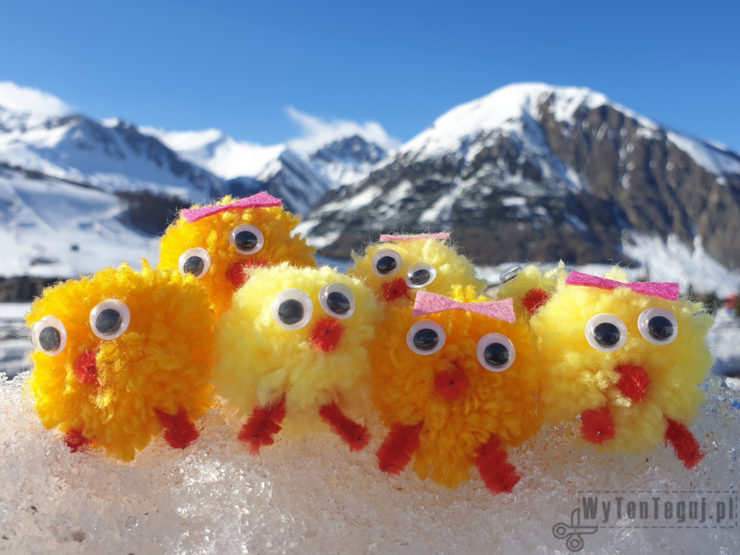 On holiday we do not slow down the pace and we started to produce pom pom chicks. I did them together with the children, so I decided on the easiest version of pom poms, i.e. pom poms on a fork 🙂 This turned out to be a great choice, because children could do most of the work themselves. Particularly they liked ‘chicken at the hairdresser’ stage 🙂

You can find other Easter inspirations along with the instructions in the Easter section.

Making of pom poms on a fork

Pompoms on a fork are definitely one of the simpler pom poms, if not the simplest ones. Ideally suited for creative play with children. You can find more pom pom making methods here.

Begin by winding the yarn on the fork. Use the ‘toothed’ part so that there is a small gap at the beginning of the teeth. The more yarn you wove, the thicker the pumps will be.

Before you remove the yarn from the fork, tie the yarn in the middle to form kind of a bow. Transfer the extra piece of yarn through the hole in the fork and tie a tight knot.

Now you can take off the yarn from the fork. Cut the loops with scissors. The first version of the pom pom is ready, although it still does not look too nice.

At the end, the pom pom goes to the hairdresser, which is children’s favorite part. The idea is to cut out protruding threads and give the pom pom a nice round shape.

The pom pom is ready. Time to transform it into a chicken 🙂

Our chickens were based on one pom pom. We attached eyes, beak and legs. We have added some pink bows so that the girls can distinguish which chickens is whose. I used universal glue, so we had to wait about an hour for the glue to dry.

The chicken is ready, wasn’t it easy? Pom pom chickens best present in the group, so make more of them.