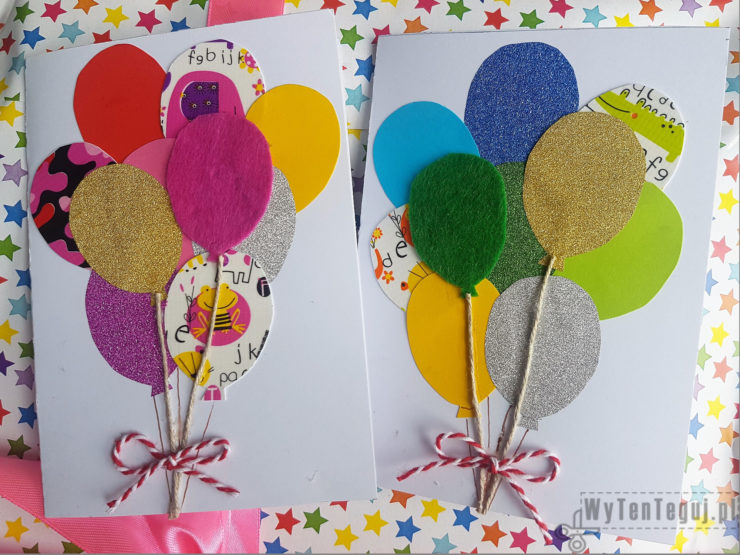 Birthday parties season has begun. Gifts bought, but I forgot about the cards, so I had to organize something quickly. This is how this tutorial for easy and fast birthday cards with balloons was born.

Making of birthday cards with balloons

Start by preparing the card base, ie measure out and divide the cardboard paper sheet in the same way as for Easter cards.

Then prepare the balloon template. Just draw it on a cardboard paper and cut it out, mine is about 1 inch. Thanks to this, all balloons will have the same shape. Now copy the balloon template on colored papers and cut out. Prepare about 10 color balloons. I have more because I needed them for 2 birthday cards.

In the next step, create a balloon composition. First practice it, and when you achieve a satisfactory effect, start gluing.

There was still something missing in my composition, so I added 2 balloons on top. Cards look much better immediately. I used one felt balloon counting on a delicate 3D effect.

At the end, it’s time for the string. Initially, I planned to draw, so that it would be faster, but the extra balloons on the top thwarted my plans. I decided to attach a string. It is quite troublesome, but the effect is worthwhile. For the other balloons I drew strings. They should go down to the bow, not the end of the page. So, do not make my mistake and plan the place of the bow before drawing the lines. At the end stick the bow and birthday cards are ready!