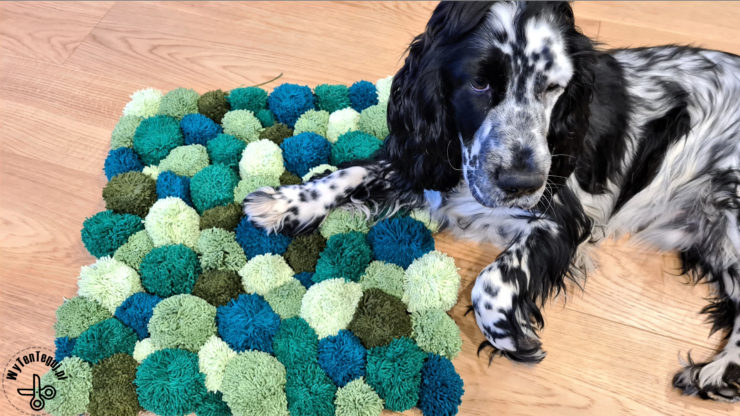 The pom pom rug is a proposition for the patient crafters, as it requires many hours of making pom poms. There are doubts along the way, but the end result rewards the effort, because the pom pom rug looks great 🙂 Ours serves as a pillow, because despite the initial approval, the dog started testing the durability of the rug 😉

How to make yarn pom poms?

Detailed instructions on how to make yarn pom poms with a comparison of tools can be found in our post. I definitely prefer pom pom makers. However, we use forks when we make pom poms with kids.

It is important to firmly tie the pom poms, even with double yarn. Additionally, it is worth leaving longer threads after tying, as it will be easier to attach the pom poms to the pad later.

How to make a pom pom rug?

The greatest difficulty is to make all the pom poms you need. Then tying them to the pad is a pure pleasure.

As I mentioned, the use of a dedicated rug pad would make the work much easier. Unfortunately I decided to use a silicone mat for drawers. So for each pom pom I had to punch a hole in the mat. Pom poms should be placed densely to keep the rug compact and therefore more durable.

Check out our ideas

If you’re looking for more with pom poms, you’ll find them in the Pom poms section.

One thought on “How to make the pom pom rug?”